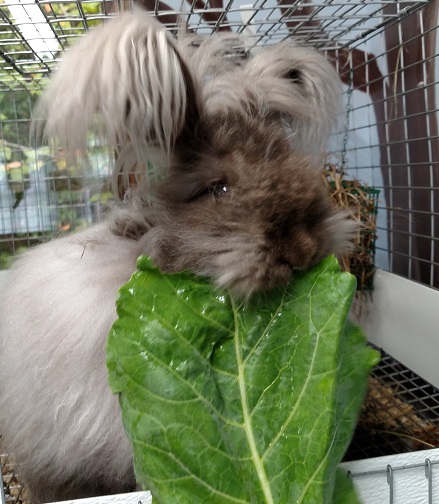 After breeding Angora rabbits for several years, we have learned that Angora Rabbits must have around the clock access to fresh water and good hay! Most other nutritional requirements can be met with rabbit food pellets (16% TO 18% protein) available from most farm supply stores. The suggested amount of pellets is ½ cup per five pounds of rabbit weight per day.

Rabbits are grazers, meaning they nibble all day at whatever’s available. Hay should be the principal component of their diet. The pellets are used as a supplement (think vitamin pill) and a way to regulate the rabbit’s weight.

Rabbits like routine and will do better if they have a feeding schedule. Feeding can be morning, noon or night as long as it is consistent.

Whenever you get a new rabbit, ask the previous owner what kind of food and how much the rabbit has been fed, its fine to change their diet but make sure to do it slowly (over 5 to 7 days) to give the rabbit a chance to get used to its new home and diet. It is common for the person selling a rabbit to supply enough food for several days to aid the transition.

We cannot stress how important fresh clean water is for rabbits! Make sure they have access to water at all times.

Did you know that water helps rabbits to regulate their body temperature?

Story time! When our rabbitry was new, we took several of our rabbits to our Veterinarian for therapy checkups. She carefully checked our rabbits and then looked up at us and said, “You use water bottles don’t you”. We were surprised and told her yes we did but asked her how she knew? She told us that they had hard bellies, and that is a sign that they aren’t getting enough water. We bought bowls on the way home!

We now have water bowls and bottles in every cage. Some of the rabbits hardly ever touch the bottles and some empty their bottles often. With both, we know they always have water in case they dump their bowls between feedings.

How Much Hay and What kind of Hay?

We already answered the “How Much Hay” question above, but it’s worth repeating! Give your rabbits all the hay they will eat! They should always have access to clean fresh hay!

The real problem is how to supply angora rabbits with lots of hay without them just spreading it all over the place and peeing on it or getting it tangled in their long wool! There are hay racks that can be attached to the side of a cage or cut into a cage, we sometimes stuff toilet paper tubes with hay when we take them out but inevitably, a lot ends up in their wool. We started cutting the center out of suit holders (bird feeders) and attaching them to the side of the cages. It works well but they still take them down and play with them. If any of you come up with a good answer for keeping angoras from getting hay in their wool please let us know!

Hay is a good source of vitamins A, D, Calcium, and protein. It is also essential to help rabbits to wear down their teeth (rabbit teeth never stop growing so they need to wear them down). The most important benefit of hay (Especially for Angoras) is the supply of fiber to keep their gastrointestinal tract moving (prevent GI Stasis)! Angoras clean themselves and ingest their own wool, this can cause Wool Block (I’ll cover that more below) so it is very important for them to have hay all the time!

What kind of Hay?

We suggest Timothy hay as your standard everyday hay. Not all hay is created equal. Even the same kind of hay will vary drastically from when it is cut. Some locations allow farmers to grow three crops of hay every year and the three “cuts” are different. “First cut” will tend to be more stem and less leaf which makes it high in fiber but lower in fat and protein. “Second cut” is generally the best because it has a great balance of stem and leaf therefor a good nutritional balance. “Third cut” hay tends to be more leafy and softer. Your rabbits will love it but its lower protein levels mean that you need to keep an eye them and make sure their digestive system is moving.

It’s not a bad idea to mix in other types of hay from time to time, it breaks up the monotony by giving your rabbits a bit of verity. But keep in mind that different types of hay have different nutrients so read up before changing any part of your rabbit’s diet. We occasionally give our buns alfalfa (which is actually not grass but a legume in the bean family) because it has more calcium and can be good for rabbits nails (if you notice their nails are brittle or wearing funny). But be careful not to give much alfalfa because it also has a lot of Calcium which rabbits can only process with their kidneys. If they get too much calcium they can develop kidney stone, bladder stones, and other issues with their bladder like thickening urine and infections.

Orchard Hay (or orchard grass) is a good occasional treat and can get that picky rabbit to eat hay. Oat hay is also a good alternative and rabbits usually love it! Bermuda, brome, coastal, are just a few that you can look for. If you can find a local source of good hay your rabbits will Love you for it!

I have met many farmers that will tell you to smell or even taste hay to see if it is good. I don’t taste it but I do smell it. I have come across hay that smelled old or musty and I have found some that smells so much better (fresher) than others that I was tempted to taste it.

There are plenty of charts and tables that tell you how much to feed rabbits all over the internet. We disagree with a one size fits all approach (above we said “suggested amount”). We have learned that Angora rabbits come in all shapes, sizes and appetites. Even when we only had English Angoras, we saw that some just didn’t seem to eat much and others acted like we were starving them every time we opened the cage to feed them. The real key is to get to know your rabbits! As I stated above, use the food to regulate the rabbit’s weight and hay consumption. Use a Timothy based pelleted food. If they are not eating their hay or they are getting too heavy then back off a little on their food. If they eat all the hay and attack the food bowl before you can fill it, then you can give them a bit extra.  HAY IS THE MOST IMPORTANT PART OF THEIR DIET.

Angora rabbits should have at least 17% protein in their feed. You need to take into consideration their total diet when choosing. If you have a good supplier of fresh Timothy hay and your rabbit eats plenty of it then you could go with 16% or if your hay isn’t that good you can go up to 18% protein. Please be mindful and read the labels! Some “pet rabbit” foods will be as low as 14% protein. It’s best to purchase a good name brand “Show” food.

Just like their hay, food pellets should smell good, like hay! If your pellets smell old or musty than throw them out and get some new food! The pellets should also be soft but not damp and crumbly but not so dry that it is dusty. Once again, pay attention to what you feed them and you will soon know what “Normal” is.

There are people out there that swear by an all-natural (no pellet) diet for their rabbits. I do not disagree with the concept! I applaud anyone that can do it!

That said, I feel that it would need to be carefully monitored, planed, and regulated! I also feel that it would be costly, time consuming and it would vary with the seasonal availability of produce. Lastly, if you need to be away from your rabbits for several days, the instruction page for whoever is feeding your rabbits would be several pages long. I prefer to keep our rabbits diets as steady as possible that way any changes in their health or disposition can be traced to the changes. As stated above, we do give treats and we occasionally change up their hay. But our rabbit’s diet is generally water, hay, and pellets with occasional treats.

Check you are identifying plants correctly and that they are not poisonous. Apple tree twigs and small branches are enjoyed and help keep the teeth in trim. Each rabbit has its own individual tastes, and you will soon learn what each rabbit enjoys best.

Rabbits have different nutritional requirements during the various stages of their lives. Nursing babies will usually get all they need from their mother’s milk but sometime they might need outside assistance. One of our Does had a litter of ten kits. Four of them were smaller than the rest and we could see that those four weren’t winning the fight to latch onto a nipple. Mother rabbits don’t lay still for long, only about ten to fifteen minutes at a time and only two or three times a day. We were hand feeding the Four “Specials” twice a day. Babies can be fed XXX thin to begin with then thicker as they age.

When they are first weaned they are growing like crazy and should have “Free food” which means their food bowl should always be full. When a mother is nursing she needs free food and even after the kits are weaned she will need extra food to recover a healthy weight.

As Angoras get older their wool growth slows down a little bit so they might not always finish all their food.

Angora rabbits have varying nutritional requirements according to their stages of wool growth.

There was a study done in 1984 that looked at the nutrition required for optimal wool growth in commercial fiber rabbits. The study revealed that directly after harvesting, the wool the rabbits needed more nutrition because that is the time of the fastest growth. It slowed down a little the following month and a bit more the month after that, to its slowest just before the next harvesting.

The exact numbers of that study probably won’t mean much to the average angora owner except to know that they should be well fed for a couple weeks after harvesting the wool.

Angora Rabbits use a lot of their metabolism to grow their long wool so they need extra fuel to stay healthy during peak periods of growth. Our years or running a rabbitry have shown us the importance of providing our rabbits the proper diet.

link to What is an Angora Rabbit?

When we started this blog page, we intended to use it to answer the questions that we are frequently asked when we take our rabbits out into public. One of the most common questions is “Where do...

Continue Reading
link to How Long Do Angora Rabbits Live?

Whenever we take our rabbits into public (for a festival or for therapy visits) one of the most common questions we get is on their expected lifespan. To get the most accurate answer possible, we...